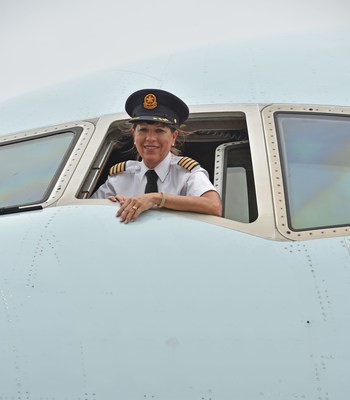 MONTREAL, Oct. 25, 2022 /CNW Telbec/ - Air Canada and CAE today announced the two Montreal-based global aviation companies are joining together to advance diversity in aviation doubling the number of 2023 Captain Judy Cameron Scholarships granted to young Canadian women studying to become commercial pilots or maintenance engineers. Up to four aspiring commercial pilots will be invited to join the CAE Women in Flight program as an ambassador.

Launched in 2019, the Judy Cameron scholarships were previously awarded to four recipients, which is increasing to eight with the support of CAE and their Women in Flight ambassador program. The annual Captain Judy Cameron Scholarships, established in honour of Air Canada's first female pilot to help foster the next generation of women following in her trailblazing footsteps, are awarded in conjunction with the Northern Lights Aero Foundation.

"I am delighted that CAE is partnering with Air Canada to double the Captain Judy Cameron scholarships for Canadian women in flight training. Financial support to assist with the high cost of flight training is crucial to their success. When I began my first flying lesson in 1973, I never imagined that someday I would be able to encourage other women to enter this amazing career. Thanks to Air Canada and CAE for helping women to follow their dreams and fly. The Northern Lights Aero Foundation is honoured to be part of this," said Judy Cameron, Boeing 777 Captain at Air Canada (retired), and Director, Northern Lights Aero Foundation.

"Air Canada has long championed gender equality particularly in non-traditional, highly specialized aviation careers, and we are incredibly pleased to have CAE, our long-time flight simulation partner, join with us to double the number of Captain Judy Cameron scholarships that will be offered for 2023. This means together, we can expand the reach to help more young women across Canada in their studies as commercial pilots or maintenance engineers. We look forward to seeing these recipients follow their aviation dreams and in future, certify as airworthy, or be in command of, an Air Canada aircraft," said Murray Strom, Senior Vice President – Flight Operations at Air Canada.

"Diversity, equity and inclusion are central to CAE's culture. We are proud to collaborate with our long-time partner Air Canada on our first scholarship-matching initiative as part of CAE's Women in Flight ambassador program," said Nick Leontidis, Group President, Civil Aviation, CAE. "The Captain Judy Cameron Scholarship program aligns with our efforts of creating a movement that encourages young women to dream big. A movement started by pioneers like Captain Cameron, inspiring young women everywhere to pursue careers in aviation."

Judy Cameron became the first female pilot hired by Air Canada, Canada's largest airline, in April 1978 at the age of 23. She was the first woman to graduate from Selkirk College's Aviation Technology Program in 1975. Throughout her flying career of 40 years and over 23,000 hours, she has flown the DC-3, Twin Otter, Hawker Siddeley 748, DC-9, Lockheed 1011, Airbus 320, Boeing 767 and Boeing 777 to the far corners of the world. She became a captain in 1997 and in 2010, she became the first female captain in Canada of a Boeing 777, the largest aircraft in Air Canada's fleet. She retired in 2015, received the Elsie MacGill Northern Lights award in the Flight Operations category that year, and in 2016 she was chosen by the 99s (International Organization of Women Pilots) to be on its Canadian postage stamp.  Today, Captain Cameron continues her volunteer work mentoring and supporting the next generation of female pilots with the Northern Lights Aero Foundation.

Air Canada proudly launched the Captain Judy Cameron Scholarship in her honour in 2019.

CAE's Women in Flight Ambassador program is helping create a movement to encourage young girls and women to dream big and have no limits. With only five percent of women pilots worldwide, this program is geared to show women that they too can reach for the sky. This is a co-branded program in which CAE is partnering with airline customers globally to create women pilot ambassadors via scholarships ranging from partially funded to fully-funded pilot training.

Launched in 2018, the program was expanded in July 2022 to include to include partnership with more airline customers. The program was initially limited to candidates enrolled in one of CAE's airline-sponsored cadet training program. With the evolution of the program, CAE is also matching existing airline scholarships. The goal of the program is to build a community of ambassadors who demonstrate leadership skills, active involvement in their communities, perseverance, who are passionate about aviation, and can inspire women to join the pilot profession.

To learn more about the program, go to  CAE Women in Flight Ambassador Program | CAE

Air Canada is Canada's largest airline, the country's flag carrier and a founding member of Star Alliance, the world's most comprehensive air transportation network. Air Canada provides scheduled passenger service directly to 50 airports in Canada, 47 in the United States and 69 internationally. It holds a Four-Star ranking from Skytrax. Air Canada's Aeroplan program is Canada's premier travel loyalty program, where members can earn or redeem points on the world's largest airline partner network of 45 airlines, plus through an extensive range of merchandise, hotel and car rental rewards. Its freight division, Air Canada Cargo, provides air freight lift and connectivity to hundreds of destinations across six continents using Air Canada's passenger flights and cargo-only flights with its fleet of Boeing 767-300 freighters. Air Canada has committed to a net zero emissions goal from all global operations by 2050.

At CAE, we equip people in critical roles with the expertise and solutions to create a safer world. As a technology company, we digitalize the physical world, deploying simulation training and critical operations support solutions. Above all else, we empower pilots, airlines, defence and security forces, and healthcare practitioners to perform at their best every day and when the stakes are the highest. Around the globe, we're everywhere customers need us to be with more than 13,000 employees in more than 200 sites and training locations in over 40 countries. CAE represents 75 years of industry firsts—the highest-fidelity flight and mission simulators, surgical manikins, and personalized training programs powered by artificial intelligence. We're investing our time and resources into building the next generation of cutting-edge, digitally immersive training and critical operations solutions while keeping positive environmental, social and governance (ESG) impact at the core of our mission. Today and tomorrow, we'll make sure our customers are ready for the moments that matter.