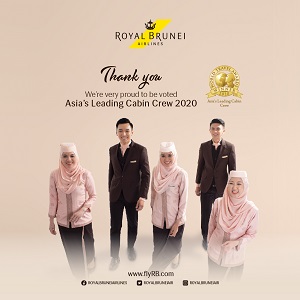 We are delighted to share Royal Brunei Airlines (RB) has been announced as the official winner of the Asia's Leading Cabin Crew 2020 at the World Travel Awards (WTA) during the Asia Winners Day 2020 held virtually on 3 November 2020.

RB has been nominated for the category three consecutive times since 2018, and this year the airline was awarded the coveted accolade after receiving the most number of votes in a world-wide poll from travellers.

Mr Martin Aeberli, Acting Chief Executive Officer of RB said: "The team at Royal Brunei Airlines are delighted to be receiving for the very first time the top award in the region. As Brunei's flag carrier, we reflect our Bruneian values in everything we do and the defining trait being the genuine and warm hospitality we deliver to our guests. We're very proud this has been recognized with the amazing services our crew provides as a representation of the airline and Brunei. I would like to thank our staff for their dedication and contribution to support our strategy of service focus and enhanced guest experience. On behalf of our crew and Team RB, we would like say a big thank you to our loyal guests and supporters who have voted for us and trusted our truly Bruneian hospitality."

"We have received a number of key service awards recognizing us for our excellence in service and products. It is an honour to now add this to our list of accolades and winning this award will support us in sharing the news to more guests who we'll welcome on board when the time is right. As a small boutique airline, this also further validates the hard work and progress RB has been making to become a brand synonymous with hospitality and a warm welcome. This is a proud accomplishment for both the airline and Brunei."

RB is now proud to include our WTA Asia win alongside the host of awards we have received over the past 18 months including from professional rating agencies for the Skytrax 4 Star Airline Rating and APEX Official Airline Ratings Five-Star Major Regional Airline Award.

Upon winning this award, RB will be competing for the highest accolade in the industry alongside major international airlines under the Leading Cabin Crew in the world awards to be announced on 27 November 2020.

Royal Brunei Airlines would like to express its gratitude to all our frontline crew, on air and on ground, for their continuous support that has made Brunei and the National Carrier proud. A special thanks to the voters and supporters for choosing RB to be Asia's Leading Cabin Crew 2020.