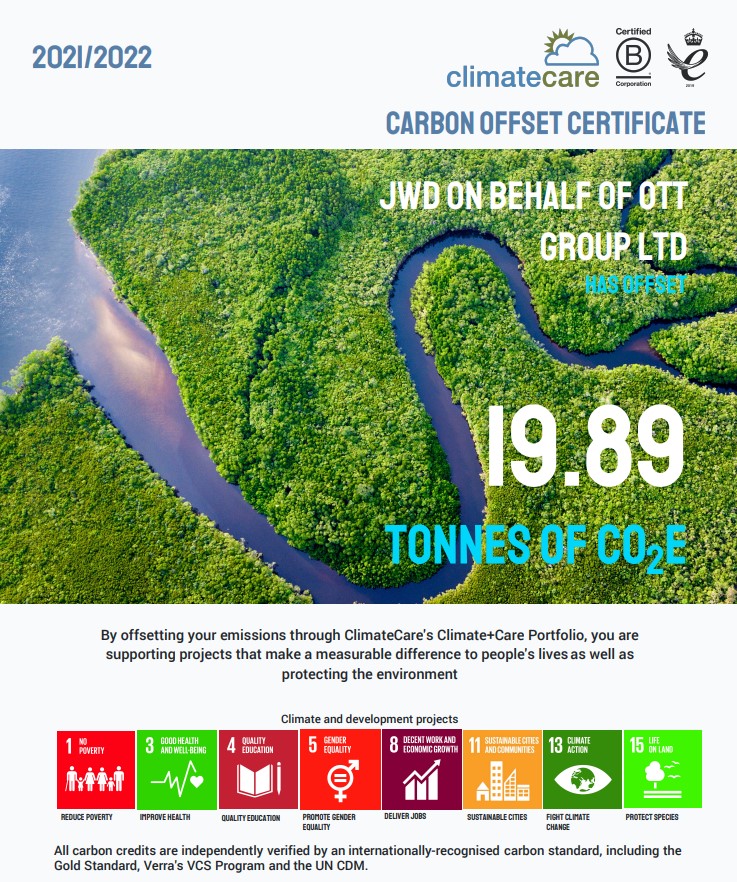 The company has worked with Alan Davison of JWD Futures, firstly to reduce the amount of carbon produced by OTT Group as a business and then, in a second stage, offsetting elements of the business where emissions cannot be reduced or avoided.

OTT will be offsetting a total of 19.89 tonnes of carbon emissions for 2021-22. The calculation takes into account emissions generated by all aspects of the platform's business operations, including flights, hotel stays, employee road miles, exhibition attendance, staff meetings and office costs.All of the carbon which cannot be reduced is offset by paying a contribution to a specialist company which then invests the funds into projects which supports Sustainable Cities, Quality Education and Climate change carbon neutral projects, which are the three core values that OTT have been striving to achieve. Examples of projects that have benefited from OTT in its offsetting programme have been more tree planting, forest creation and implementing technological advances in developing economies which help reduce overall emissions.

We spoke to Alan to find out why carbon offsetting is a two step process, what’s measured and how offsetting works...

What is the impact of remote learning over previous modes of product knowledge delivery, which included people travelling to a single point or a representative delivering information at in-person events?

“Sustainability is high on everyone's agenda now as well as the carbon footprint you leave as an organisation or company. Previously, there were FAM trips where people went out to a different destination or a representative from travel companies would go around and see various companies face-to-face, which were all carbon producing activities. You either flew there or people got in the car and drove there.”

“With online training you're using electricity to generate your computer and that's about it, therefore the carbon is greatly reduced. If you can offset the carbon that you use as an organisation, you're on your way to becoming carbon neutral, which is what everyone's striving to do.”

Are you finding that carbon reduction and offsetting is now becoming more of a ‘must do’ rather than a ‘nice to have’?

“Every government is trying to be carbon neutral at some stage in the future, they're trying to push forward the agenda from COP-26, where everyone is discussing how they can become more sustainable. You’ll always produce carbon, you can't get away from that, but it's how you reduce it that matters. That's how we have worked with OTT - reduced their carbon footprint, and then offset what we can't reduce. It’s a two stage approach.”

Can you explain how carbon offsetting works?

“Carbon offsetting is used when you get to a situation where you can't reduce your carbon output any lower, for example, as a company, you can reduce your carbon by providing electric cars for staff to use or install ground source heat pumps to heat your offices, all of which will reduce your carbon emissions. The offsetting is because there's only so much reduction you can do as you have to turn the lights on, which burns electricity or you do need to physically meet as a team somewhere or have an office for example”

“Once you know how many tonnes of carbon you're producing a year, or even as an individual, you are able to offset it. If you are going to fly off to the Maldives, for example, you can then say ‘Well, it's going to cost me X number of tonnes of carbon produced by my flight, this is the cost I need to pay so that I am now carbon neutral for my trip.’”

“Offset companies put money into carbon reducing projects. The idea is that if enough people put their contributions into a company, then they use that money to support Carbon reducing projects. They also look at global projects, for example, there may be a facility, for example, in India which produces a lot of carbon, but with a bit of technology, those emissions can be reduced. Offsetting companies give a commitment that, any money you put in related to the amount of carbon you wish to offset, will reduce carbon somewhere else in the world.”

Is this something you're seeing across the travel industry as a whole?

“It's not just across the travel industry, it's across all industry sectors. Everyone is trying to reduce their carbon and the end users are becoming more interested in ethical businesses. The public are becoming more aware of who is a carbon efficient organisation as well.”

“Are you really going to use old diesel Land Rovers chugging through a safari, or promote the use of battery operated vehicles? Those will attract more customers because that's now what the public want. They want to spend their money wisely on ethical companies.”

“Across the nation, we’ve been recycling at home, but we also need to be looking at what we can do within organisations and how businesses can become carbon neutral.”

What simple steps can agents working from home also take to reduce or offset their carbon?

“They've done an awful lot already by not travelling into the office. The process is in two stages - reduce your carbon and offset what you cannot reduce. With people working from home, on a cold day like today, the temptation is to increase the thermostat and pump the house full of heat.”

“Just turning the heating down by one degree saves an awful lot of carbon that you would normally be putting into the atmosphere. Another example is the temptation when you're working from home is to leave your lights on around the place and then just go onto your computer to work without turning the other lights off.”

“Those are some of the measures you can make at home, but within companies and organisations is where big differences can be made, and that starts from the head down. If everyone, from the head down, has the will and the way to save carbon, then those measures will be passed on to everybody else, who will benefit from it.”

How difficult is it to get a baseline for carbon emissions when many travel professionals have been restricted to working from home for the past 20 months?

“We can’t take a benchmark from 2020, so for OTT I’ve based my calculations based on two years ago. Carbon emissions certificates are not a ‘one time’ occurrence, we monitor emissions throughout the year to make sure none of the figures change. So what we're saying is based on two years ago, this is what we're expecting to do in 2022 and this is the amount we need to offset. Then we monitor it as we go.”

You can’t act on what you can’t measure. What sort of elements do you look at when making carbon emission calculations?

“We've looked at miles driven by all members of staff in their day-to-day work. We've looked at how many flights we anticipate staff will be taking, for example we have ITB coming up in Berlin. How much electricity will everybody be using, just by having their computers on and working on behalf of OTT? There’s travel conferences and physical meetings, staff getting together because OTT no longer has a central office, although, already that’s a great carbon saving.”

“You’ve still got to meet up, so there will probably be 10 of those sorts of meetings a year, plus attending conferences or going to see Clients where there might be a need for a hotel stay. We've taken a guestimate about what we think that's going to be. Obviously those flights abroad also need hotels when you land there, which are part of the carbon calculations. We’ve also looked at electric equipment, disposing of electric equipment, posting the prizes that we issue for the OTT Awards, paper, cardboard, to name but a few. Each of these elements and more has a carbon usage figure attached to it.”

How do you calculate the exact amount of carbon that needs to be offset?

“There are industry standards that state if you use, for example, one kilowatt of electricity, that equates to X amount in Sterling to offset that carbon generated.”

“We will monitor this throughout the year. If people are driving more miles or there’s suddenly a rush and everyone starts to fly to conferences, then OTT’s carbon offsetting costs would need to be increased to match the new level of activity.”