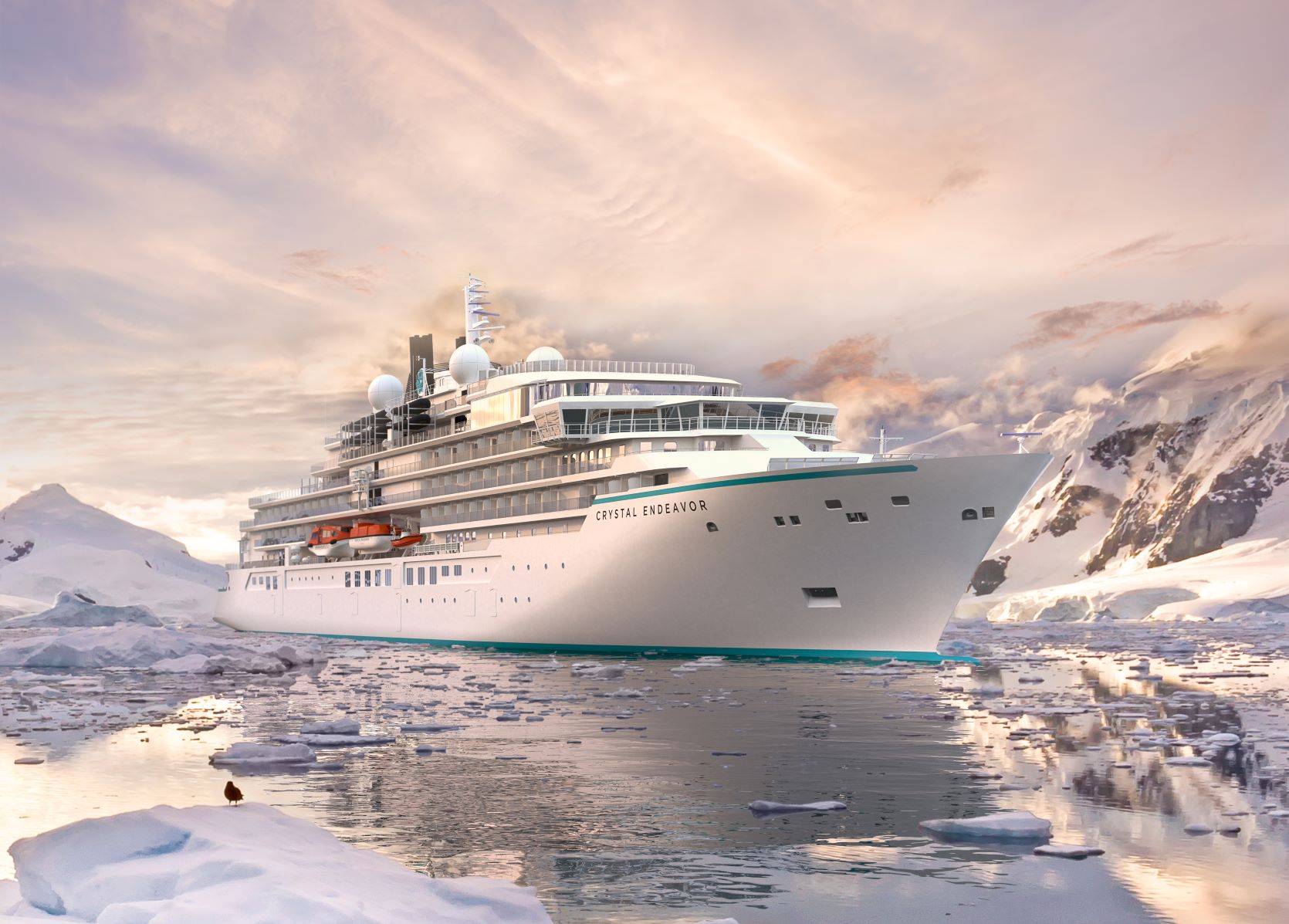 Crystal to Livestream Event via its Crystal Cruises Facebook Page

MIAMI, FL, June 25, 2021 – Today, Crystal Expedition Cruises announced Manuela Schwesig, Prime Minister of Mecklenburg-Western Pomerania, as the Godmother for new luxury expedition yacht Crystal Endeavor. Schwesig will name the yacht in a ceremony tomorrow at MV WERFTEN in Stralsund, Germany, where the ship is designed and built. The new 20,200 GRT, all-suite, all-veranda, all-butler serviced vessel is the first ever Polar Class 6 (PC6) luxury expedition yacht “Made in Germany” and sets a new standard in remote worldwide exploration with luxury, power, safety, spaciousness and comfort never before experienced. The naming ceremony for Crystal Endeavor will be livestreamed on the Crystal Cruises Facebook page beginning at 10:30 AM CET/4:30 AM EST inviting travelers from around the world and members of the Crystal Family to celebrate the occasion. The recorded ceremony will be posted on Crystal’s Facebook page for those who cannot view live.

“We are pleased to announce Prime Minister Manuela Schwesig as Godmother for Crystal Endeavor, our unparalleled and bold new expedition yacht, proudly ‘Made in Germany’ and precision engineered to launch a new standard in global travel,” said Jack Anderson, president of Crystal Cruises. “The construction of this magnificent expedition yacht could not have been accomplished without the commitment and support of the German government and Prime Minister Schwesig, for both MV WERFTEN shipyard and this unique project. Together we have brought much-needed employment to the region and achieved the pinnacle of excellence in Crystal Endeavor, a state-of-the-art vessel that carries the distinguished reputation for German craftsmanship forward with pride.”

"Crystal Endeavor is a true beauty and those involved in the construction of this ship have done a wonderful job,” Prime Minister Schwesig said. “Together they have built this unique ship featuring innovative technologies, especially when it comes to environmental protection, with engineering and craftsmanship of the highest order."

Prime Minister Schwesig is the first woman to serve as head of government for Mecklenburg[1]Western Pomerania, the state where Crystal Endeavor was built and a region with a tradition of shipbuilding stretching back to the Hanseatic League. A champion of human rights, women’s rights and youth advocacy, Schwesig, was also the youngest cabinet member in Angela Merkel’s third cabinet and is a member of numerous boards and civic groups including serving as a Trustee for Plan International, a humanitarian organization working in more than 70 countries across the world.

Crystal Endeavor is the ninth ship in the award-winning cruise line’s worldwide fleet, the fastest and most powerful expedition ship in the industry and features a PC6 classification that enables her to sail in Arctic and Antarctic regions. At 100 gross tons and 10,000 cubic feet per guest and a passenger space ratio of more than 100, she has the largest space per guest of any ship at sea.

Luxuriously designed to offer discerning travelers elegantly expansive private and public spaces, the ship accommodates just 200 guests in 100 well-appointed all-verandah, all-butler serviced suites, among the largest and most spacious in expedition cruising. A one-to-one staff-to-guest ratio delivers the personal and genuine service for which Crystal is known.

Crystal Endeavor was built at MV WERFTEN in Stralsund, part of a family of shipyards known for their passenger ship, icebreaker and private yacht building expertise. In fact, Lloyd Werft, sister yard of MV WERFTEN, just delivered the $600 million, 455-foot private super yacht “Solaris” this month – one of the most expensive and luxurious private yachts ever built and further evidence of this shipbuilding group’s prowess.

Crystal Endeavor was purpose built and German engineered for superior performance and safety in remote and polar conditions with power, efficiency and the environments of the world in mind. The ship’s propulsion system includes two Azipod D units and a diesel electric power plant crafted specifically for ice-going vessels to help them operate at optimum competency while providing 13,020 kW of installed power, delivering well-balanced power and propulsion installation, providing reliability, speed and comfort. During the recent sea trials, Crystal Endeavor surpassed industry standards and “crash-stopped” from full speed to zero within 660 meters (4 ship’s length) compared with the 1,700 meters (10 ship’s length) requirement.

Contracted for max speed of 19 knots, the yacht delivered an actual max speed of nearly 20 knots during the trials, exceeding expectations and standards with little to no vibration even during “crash stop” tests in the suites and public areas. Noise levels measured lower than required as did vibration, with the ship performing with 80 percent less vibration than the allowable standard. The ship’s agile maneuverability, safety and technical capabilities can be compared to a finely tuned German sports car like a Porsche, offering guests a smooth and powerful ride, especially important while cruising remote waters including in the Arctic and Antarctica where weather can be unpredictable.

Additionally, state-of-the-art FarSounder 1000 sonar technology allows the captain and bridge officers to safely detect sea life and underwater objects far in advance and navigate appropriately, with 3-D imaging of the terrain up to 1,000 meters ahead and 50 meters deep.

Crystal Endeavor has been designed with an incredible cadre of ecologically minded features, state-of-the-art technology and systems that demonstrate extreme care to navigate the oceans and waterways of the world in the most responsible manner possible. A dynamic positioning capability enables the ship to remain in one place utilizing GPS and its thrusters, rather than dropping anchor, avoiding any potential damage to delicate reefs. As part of its responsible cruising efforts, the company has equipped Crystal Endeavor to connect to shore power while in port, installed several water treatment systems and will clean exhaust emissions through a Selective Catalytic Reductant system – just a few examples of the yacht’s environmental best practices elements and the company’s commitment to eco-friendly world exploration. The line will continue Crystal’s fleetwide ban on plastic drinking straws and will also provide each guest with a reusable water-bottle for adventures ashore further reducing the need for single use plastics.

Throughout the ship, Crystal hallmarks accent guests’ onboard experience: Michelin-inspired dining options including Umi Uma, the first and only Japanese restaurant on an expedition ship, fine Italian cuisine at Prego, 24-hour room service and optional Vintage Room experience; the only casino on an expedition yacht; a glass-covered, two-story solarium – housing the Seahorse Pool and Jacuzzi – providing panoramic views from sea to sky; and the full-service Crystal Life Salon & Spa with a state-of[1]the-art Fitness Center; as well as a wrap-around Promenade Deck, an iconic Crystal design element. Expedition-specific amenities will include high-tech enrichments spaces, designated mud rooms, an Expedition Lounge and even a Helicopter Lounge. The ship’s marina will feature the “toys” found aboard a private yacht for further explorations including a fleet of Zodiacs, kayaks, snorkel gear, and a six-guest submersible and two helicopters in select regions of the world.

As the first and only true luxury expedition yacht to restart cruising in the Arctic and Northern Europe, Crystal Endeavor will set sail beginning July 17 with five 10-night immersive voyages circumnavigating Iceland’s most dramatically beautiful and fascinating locales. The Luxury Iceland Expedition voyages will sail round-trip from the ship’s homeport of Reykjavík, affording travelers convenient air options, just six hours from New York City, three hours from London and with frequent non-stop flights from many major cities in the U.S. and Europe and will be followed by the 10-night Journey of Vikings: Iceland & Norway from Reykjavík to Tromsø departing September 5, 2021. Additional autumn departures include the 13-night Norwegian Fjords & Scottish Isles Exploration from Tromsø to London, departing September 15, 2021, featuring the fjords and UNESCO treasures of Norway and an overnight in Edinburgh, and the 11-night Breton, Bordeaux and Beyond from London to Lisbon departing September 28, 2021, and highlighted by two nights in the heart of Bordeaux and an overnight call in London.

Only the world-renowned Crystal Experience offers an unwavering, unparalleled standard of excellence and luxury across four distinct cruising options: Crystal Cruises, the World’s Most Awarded Luxury Cruise Line; Crystal River Cruises, the World’s Most Luxurious River Cruise Line; Crystal Yacht Cruises, offering boutique luxury and bold adventure in the world’s most elite harbors; and Crystal Expedition Cruises, taking Crystal’s acclaimed elegance to the farthest reaches of the world. Crystal has been recognized with top honors in the Condé Nast Traveler Readers’ Choice Awards for a record 27 years including, in 2019, for Best Medium-Ship Cruise Line for Crystal Cruises, Best Small-Ship Cruise Line for Crystal Yacht Cruises and Best River Cruise Line for Crystal River Cruises. Crystal was also voted “World’s Best” by the readers of Travel + Leisure for 24 years, including, in 2017 and 2020, Best River Cruise Line for Crystal River Cruises; and won “Cruise Line of the Year” and “Most Luxurious Guest Experience” by Virtuoso for 2018 & 2019. Crystal is proud to be a platinum partner of the advisors of ASTA. For more information and Crystal reservations, contact a travel advisor, call 888.799.2437, or visit www.crystalcruises.com. Join the hundreds of thousands who subscribe to the Crystal Insider blog, follow Crystal Cruises’ Facebook page; @crystalcruises on Twitter and Instagram; @crystalrivercruises on Instagram; and engage in the conversation with #crystalcruises, #crystalrivercruises and #WhereLuxuryisPersonal.

Get into the magic this festive season with Harry Potter