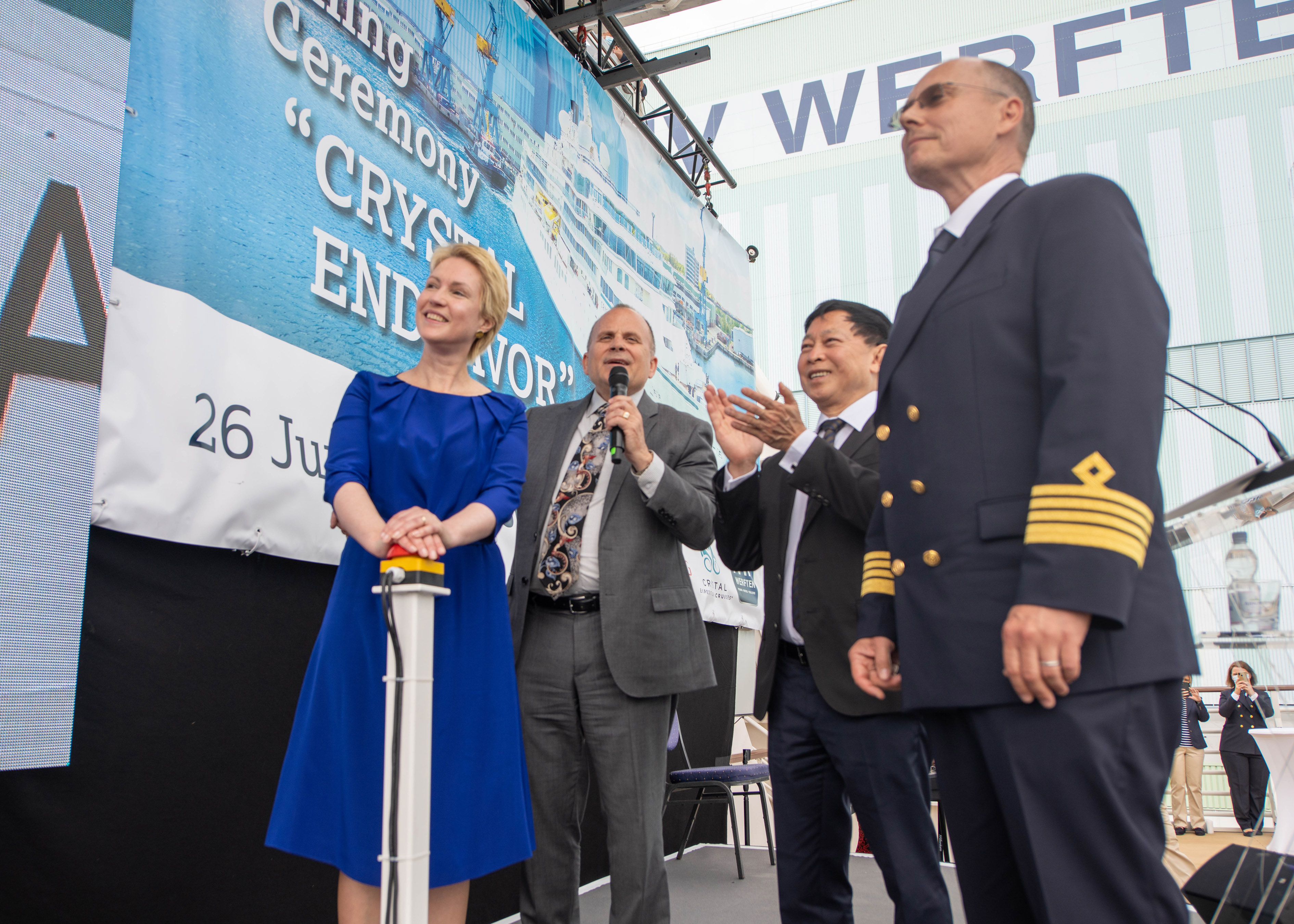 Vessel is first ever polar class expedition yacht “Made in Germany”

Almost 100 people attended the ceremony that took place on the helipad of the ship, which is docked at MV WERFTEN in Stralsund, the shipyard that designed and built the vessel. Master of Ceremonies Keith Cox, Crystal’s vice president of entertainment, hosted the event which began with the playing of the German national anthem as Crystal crew members looked on from the upper deck of the ship. After a series of remarks and a musical performance by German Soloist Carina Smerdon Kärcher, Prime Minister Schwesig christened the ship. The event was livestreamed on the Crystal Cruises Facebook page so that members of the Crystal Family around the world could celebrate the occasion.

“Today is a landmark day as we christen Crystal Endeavor, the first and only Polar Class Six (PC6) expedition yacht to be ‘Made in Germany,’ and a testament to Crystal’s award-winning design and MV WERFTEN’S superb German engineering with system redundancies, including 100 percent additional lifeboat capacity, to handle extreme polar conditions,” said Tan Sri KT Lim, the Chairman of GHK.  “She combines the finest attributes of the award-winning Crystal Experience with unmatched technical capabilities including the most installed power per gross ton for any cruise ship at over 13 MW. The most luxurious and expensive ship ever built at $20,000 per gross tons, she sets a new high standard in luxury cruising including the largest space ratio, at over 100 gross tons per guest, and most importantly, the highest staff to guest ratio in the industry at one-to-one.  We are delighted that Crystal Endeavor, as the new pinnacle of expedition excellence, now commands the highest cruise fare per night of any cruise ship in the world.”

Crystal’s Senior Vice President of Hotel Operations Bernie Leypold thanked the line’s travel partners and guests around the world for their support and loyalty and the Crystal Family, both onboard and shoreside for their devotion and service excellence to make the Crystal Experience so personal and so unparalleled. “We have the best officers and crew in the world,” Leypold said. “They are the reason travelers feel like family each time they embark, as they embody the spirit of Crystal at its very best.

“Crystal Endeavor is nothing short of superb in her design and technical features. Her details — great and small — add up to an unparalleled experience that has made Crystal’s brand stand out for more than 30 years offering travelers every convenience and indulgence they would expect from Crystal, as they venture to some of the world’s most remote and rugged places,” he continued.

Godmother Manuela Schwesig, Prime Minister of Mecklenburg-Western Pomerania, the region where Crystal Endeavor was built, expressed her best wishes for the ship, captain and crew as she christened the ship, and offered her congratulations to the team at MV WERFTEN.

“Crystal Endeavor’s naming ceremony is a sign of Germany’s relaunch as a shipbuilding location and I am honored to be named Godmother, and proud for our region and country to play an important role in the story of this unique ship,” Prime Minister Schwesig said. “Our shipyards are innovative high performers, with highly motivated experts and know-how acquired over decades. The employees at MV WERFTEN have successfully driven the transformation process from containership production via special-purpose shipbuilding to cruise ship construction in the last few years, demonstrating that even under difficult circumstances they can achieve top performances.”

“Today is a special moment of joy for all those who have contributed with great commitment to the creation of Crystal Endeavor,” said Peter Altmaier, Federal Minister for Economic Affairs & Energy. “She exemplifies the level of shipbuilding expertise and broad maritime know-how we have in Germany and want to retain even in the difficult times caused by the pandemic.”

At the beginning of June, the Federal Government agreed with the State of Mecklenburg-Western Pomerania to continue to support the shipyard with finance from the economic stabilization fund, Altmaier explained. “We want to further strengthen the competencies of high-quality shipbuilding and make shipping more climate friendly. The Federal Government is thus providing many hundreds of millions of euros for developing innovative solutions in shipbuilding. We wish Crystal Endeavor always a hand’s breadth of water under the keel.”

“We have shown that even under the most challenging conditions we in Stralsund can build ships of the greatest complexity that meet the highest standards,” said Peter Fetten, president & CEO of MV WERFTEN. “Crystal Endeavor is a unique vessel that will represent the art of German shipbuilding throughout the world. We would also like to take this special occasion to express our thanks to the federal government and state government for their commitment and support.”

Harry Glawe, Deputy Prime Minister of Mecklenburg-Western Pomerania and Minister for Economic Affairs, Labour and Health also offered best wishes and praise, “A jewel has been created that widens the portfolio of MV WERFTEN in a special way and another milestone ‘Made in Germany’ can now take to the sea. That is a positive signal MV WERFTEN is sending during the pandemic, that new ships are being completed even in globally adverse times for shipbuilding.”

Luxuriously designed to offer discerning travelers elegantly expansive private and public spaces, Crystal Endeavor accommodates just 200 guests in 100 well-appointed all-verandah, all-butler serviced suites, among the most spacious in expedition cruising. Throughout the ship, Crystal hallmarks accent guests’ onboard experience: Michelin-inspired dining options including Umi Uma, the first and only Japanese restaurant on an expedition ship, fine Italian cuisine at Prego, 24-hour room service and optional Vintage Room experience; the only casino on an expedition yacht; a glass-covered, two-story solarium – housing the Seahorse Pool and Jacuzzi – providing panoramic views from sea to sky; and the full-service Crystal Life Salon & Spa with a state-of-the-art Fitness Center; as well as a wrap-around Promenade Deck, an iconic Crystal design element.

Expedition-specific amenities will include high-tech enrichment spaces, designated mud rooms, an Expedition Lounge and even a Helicopter Lounge. The ship’s marina will feature the “toys” found aboard a private yacht for further explorations including a fleet of Zodiacs, kayaks, snorkel gear, and a six-guest submersible and two helicopters in select regions of the world.

Crystal Endeavor has been designed with an incredible cadre of ecologically minded features, state-of-the-art technology and systems that demonstrate extreme care to navigate the oceans and waterways of the world in the most responsible manner possible. A dynamic positioning capability enables the ship to remain in one place utilizing GPS and its thrusters, rather than dropping anchor, avoiding any potential damage to delicate reefs. As part of its responsible cruising efforts, the company has equipped Crystal Endeavor to connect to shore power while in port, installed several water treatment systems and will clean exhaust emissions through a Selective Catalytic Reductant system – just a few examples of the yacht’s environmental best practices elements and the company’s commitment to eco-friendly world exploration.

As the first and only true luxury expedition yacht to restart cruising in the Arctic and Northern Europe, Crystal Endeavor will set sail beginning July 17 with five 10-night immersive voyages circumnavigating Iceland’s most dramatically beautiful and fascinating locales. The Luxury Iceland Expedition voyages will sail round-trip from the ship’s homeport of Reykjavík, affording travelers convenient air options, just six hours from New York City, three hours from London and with frequent non-stop flights from many major cities in the U.S. and Europe and will be followed by the 10-night Journey of Vikings: Iceland & Norway from Reykjavík to Tromsø departing September 5, 2021.

Reasons to hire someone with no travel industry experience